How To Switch Up Your Customer OnBoarding Process With Video

2021-04-28T14:36:44+10:00 David Jenyns
Is your current customer onboarding process taking lots of your time and little return? Consider this video onboarding process as described by Brent and assess whether it fits your business model.

Utlising video into your onboarding process can save you significant amounts of time and increase your conversions.

Explore the video process that you can adapt for your business in your client onboarding process. Sign up today for your free systemHUB trial to get started. Click here.

This is a process that was previously being done by this guy who is in the video. This process was an on boarding process, a potential customer interview. This guy here is a client who was time poor. He was doing so much in the business. He did’nt really have the time to be able to do all the on boarding that he needed to do to grow the business to that next level.

This is Tony here. We said, Tony, lets go through the process. If I was a new client, what would you be asking me? We went through the actual process of what he would ask a new potential client. We started to document it step by step. We then went through and said, what if I said this instead of that? If I said, what if I wanted to make, rather than a capital gain out of my property investments, a cash flow out of my investments? Alright, in those circumstances, I would say this.

He also shared the feedback he would give at that point throughout the process. So we were able not just to ask people the questions, to survey them exactly on what they wanted out of this particular product, we were able to give them feedback on their plans.

We were able to ask people what are the goals you want to achieve? We’d be able to say, great, that’s a fantastic goal. It seems like it’s achievable, based on these parameters. The timing you’ve got is fantastic or it is too long or it is too short, whatever it is. Your finances look great. Based on that, you’d be looking at this We flow charted this out, video it just like Dave does in his business, and we’ve turned this into a process that happens automatically.

This means a lot of these pre-sales calls that happen for this particular business can happen automatically. Not just that, it’s a valuable giveaway that you can give. You can take people through, in this case, a seven day mentoring program. You can give them something of value, while also pre-qualifying them for a sale and build that relationship with them one on one.

I’m still not sure how its going to work, but initial feedback that were getting suggests that it is going to work fairly well. This is a way were replicating people out of the business.

Question: Are you envisaging this process working by you having a video and at the end of the video there’ll be a yes/no answer that will trigger them into a different sequence?

Brent: Yes. These are a whole bunch of little thirty second videos or two minute videos where there is a yes/no answer or a little data input here. This particular data input is, I would like to achieve in this case $200,000 per year before tax income from my property investments. That goes into a system which does a whole bunch of calculations based on the same sort of calculations that Tony would be doing in an interview. It feeds them through a flow chart based on their answers.

So if someone wants to make a $1 per year in property investing, Tony might say, yes, $1 per year in property investing, maybe it is worth rethinking that goal. It its below a particular threshold, he will say, that’s probably not what we do. You’re probably not right for us. Or here are some goal setting templates you can use to look at what the next step is for you, or whatever feedback is appropriate for the client.

Question: So at the end of the questionnaire, based on the information you gave us, this is our recommendation.

Brent: At the end of each day of the process, the client receives a couple of downloads they can use to implement what has been discussed on that day. At the end of the whole process, you’ve got a reasonably good property investing plan. At that point, you can say to the client, this is the limit of what we can do via videos. Let’s chat one on one. Is this something you might be interested in? Yes/no.

I only want to work with people who are highly motivated to get the most out of their property investing. Based on that, do you fit these criteria? Yes/no. In that case, let’s get your details here and let’s schedule in a call. Then the same sort of process as you saw before will happen, where people get onto a sales call. It’s the same sort of thing for this consulting call. They have to read a FAQ. That FAQ pre qualifies them. If they’re read the FAQ, then they can move to the actual call. If they have’nt, they get dropped off and rebooked.

In my own business, at the moment when it comes to systems, I’m documenting all of those procedures. 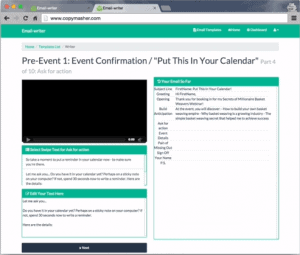 I’m mapping out the funnels or the flowcharts of the promos that I’m doing. That’s through a piece of software called copymasher. This is currently in very early alpha at the moment.

It has been created in conjunction with Steve. He is one of the smartest tech guys I’ve ever met. If you wanted to have a play with this, its currently in alpha. I would’nt mind a couple of testers. I’ve got nothing to sell you, but this is copywriting software.

The way it works is you’ve got a whole bunch of different subject lines, opening lines, pitch lines and so forth. You select one of those pitch lines, edit it to make sure it’s got your business details in it. It builds your email step by step or piece by piece. It does that same thing for every step of the funnel. It would do each one of these emails.

Save time by automating your client onboarding process with this video automation sequence. Start with your free systemHUB trial – here.